Days 70-74:
Took the ferries out and rode 35 miles around San Juan Island and Lopez Island Friday. Biking the islands the islands wasn’t as great as we’d heard, since they’re mostly hilly farmland. Boating would’ve been the way to go, and riding the ferry was our favorite part. Returned to Anacortes for a nice dinner at the local brewery and a Warmshowers stay in an adorable guest cottage.

Saturday morning we hopped on the bike for the last time, riding 71 surprisingly difficult miles to the house of some college friends in Snohomoish, WA. They were kind enough to host us for the next three nights and even took us out on their boat for a tour of Puget Sound and a lesson in catching Dungeness crabs. 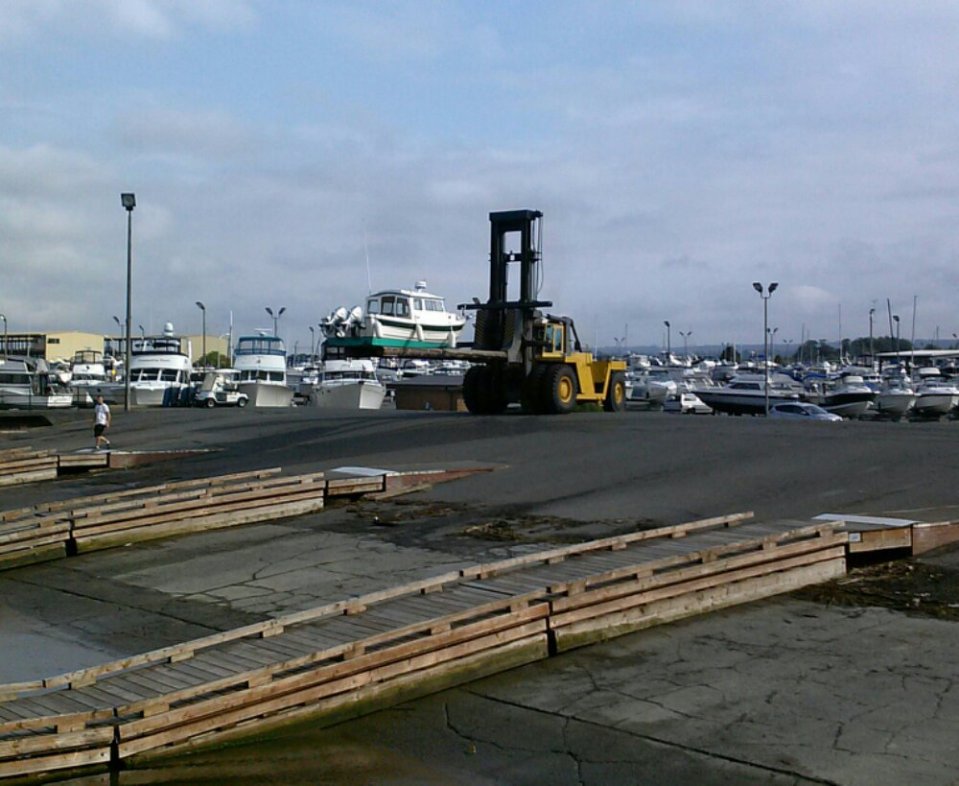 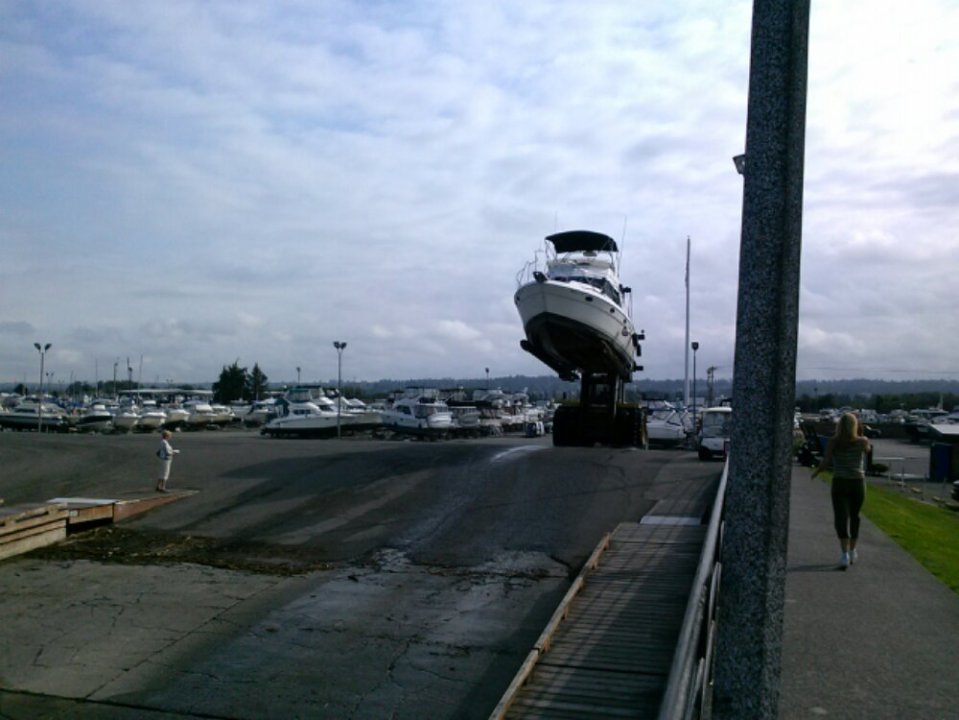 We are now sitting in the Seattle airport about to head back to Michigan. Many thanks to all our hosts and everyone who cheered us on along the way–it was a great trip! Now we just need to decide which route to do next… 🙂

Dropping it off at a shop to ship home...

Yay, we made it! (This is Deception Pass bridge, a few hilly miles south of Anacortes.)

We’ve still got a little way to go, though, since we’re still 60 or so miles away from Seattle. Since we had all day to cover the last 18 miles to Anacortes, we did some sightseeing. Rode out to Deception Pass State Park, then wound our way north along the coast to Washington Park at the far west tip of town. 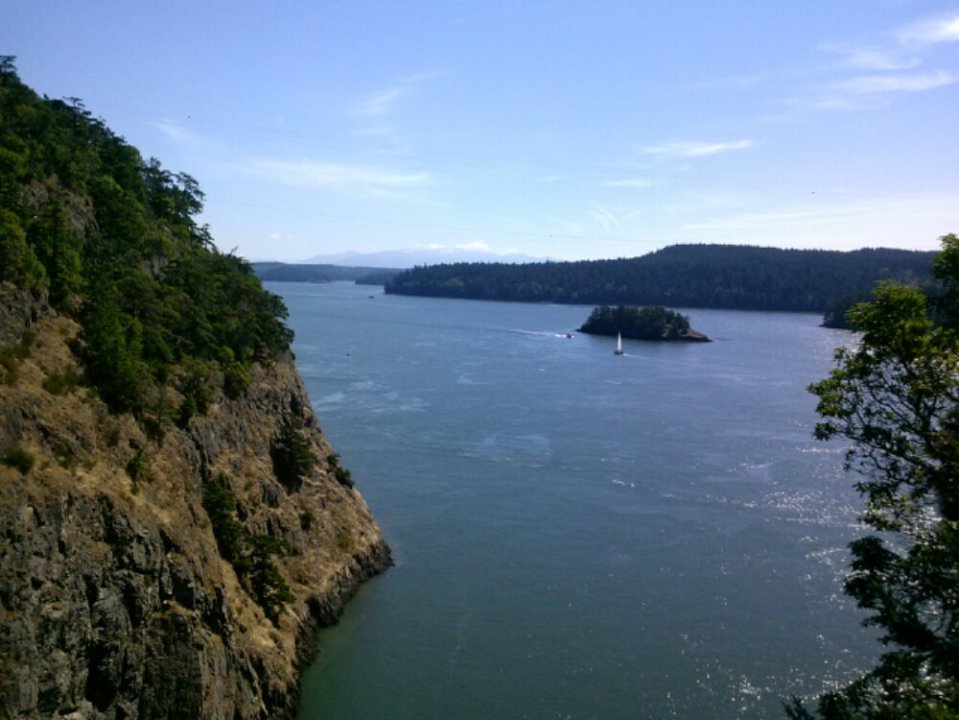 View from the bridge

Stayed there a couple hours to enjoy the lovely views, then rode back into town for a late lunch and some exploring for a total ride of 35 miles before heading to the home of our hosts for the night. Our hosts have a full house, as they were kind enough to take in (and cook for!) not only us but another couple who’d biked from Nevada as well as a British guy biking down the coast from Canada to L.A. Had an enjoyable evening visiting with everyone!

Day 68:
Packed up camp and headed for breakfast before setting out for our easier-than-yesterday 57-mile ride. 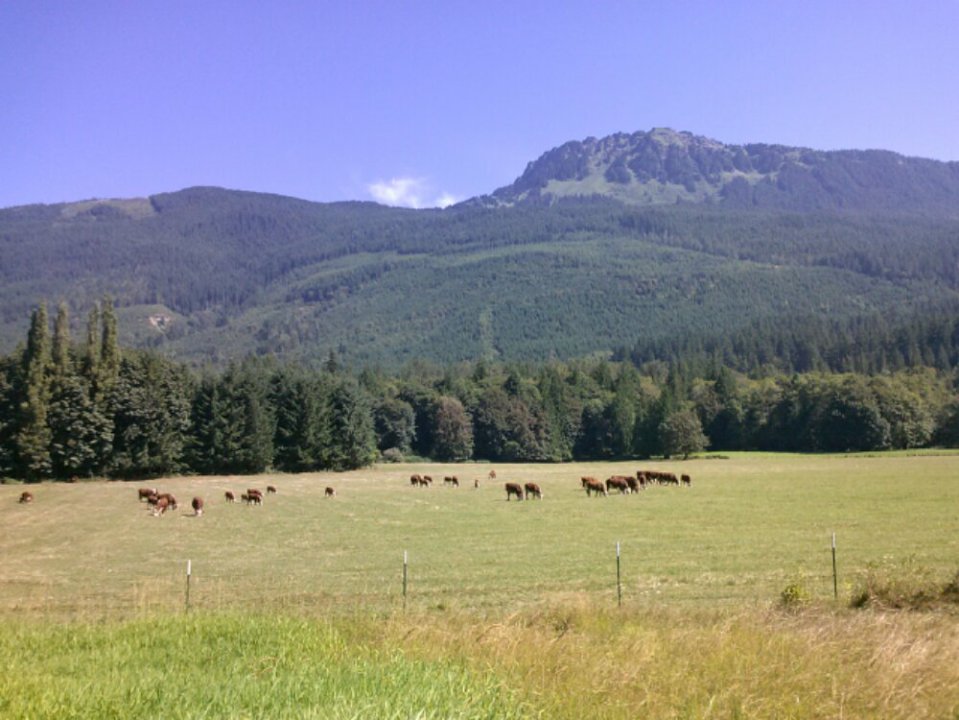 Had lots of snacking opportunities on this ride, even without many towns:  wild blackberries at perfect ripeness were growing in huge miles-long stretches 8 or 10 feet tall all along the route!

A could only get J to eat wild berries by letting him wash them first...

Followed the beautiful Skagit River for much of the ride, through jungle-like forests of towering rocks and moss-covered trees.

Had a nice treat when we were met by our Warmshowers hosts for the night about 25 miles outside of Burlington, our destination. We were glad to have the company, especially from another tandem, and we had a very enjoyable evening visiting with them and hearing about their many bike tours.

Day 67:
Started the day at 6:40 with an hour and a half pre-breakfast ride to Mazama. 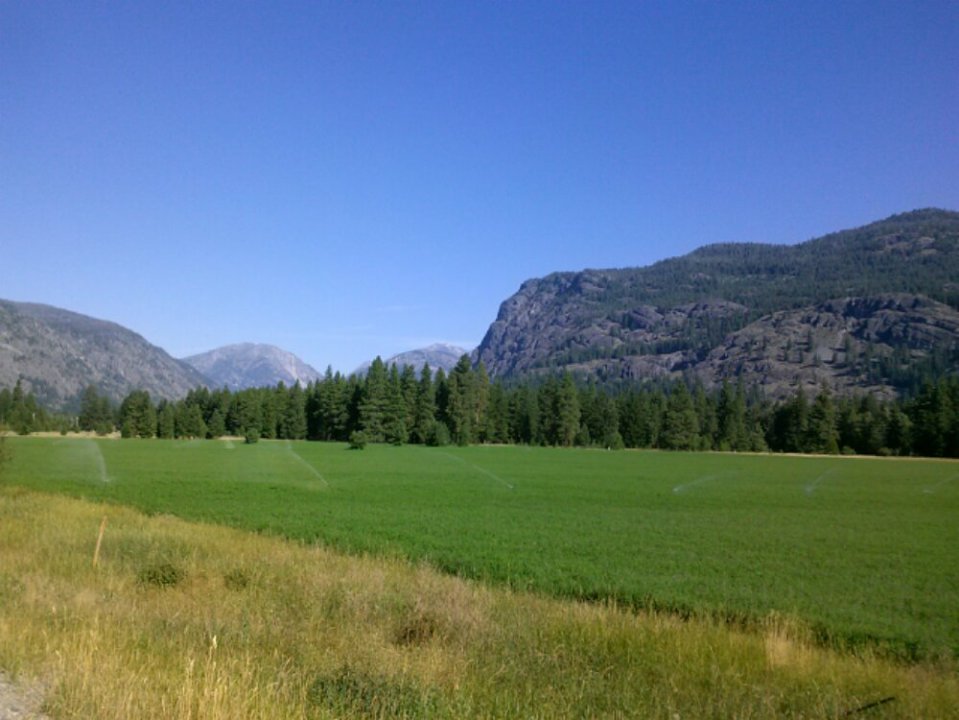 Had the usual hearty meal and began the climb to Washington Pass, our fifth pass in five days. This one was different from the others in that the roadway was much more open (we weren’t down in the trees or in rain the whole time), so we had majestic, sweeping views for most of the ride through Cascades National Park. 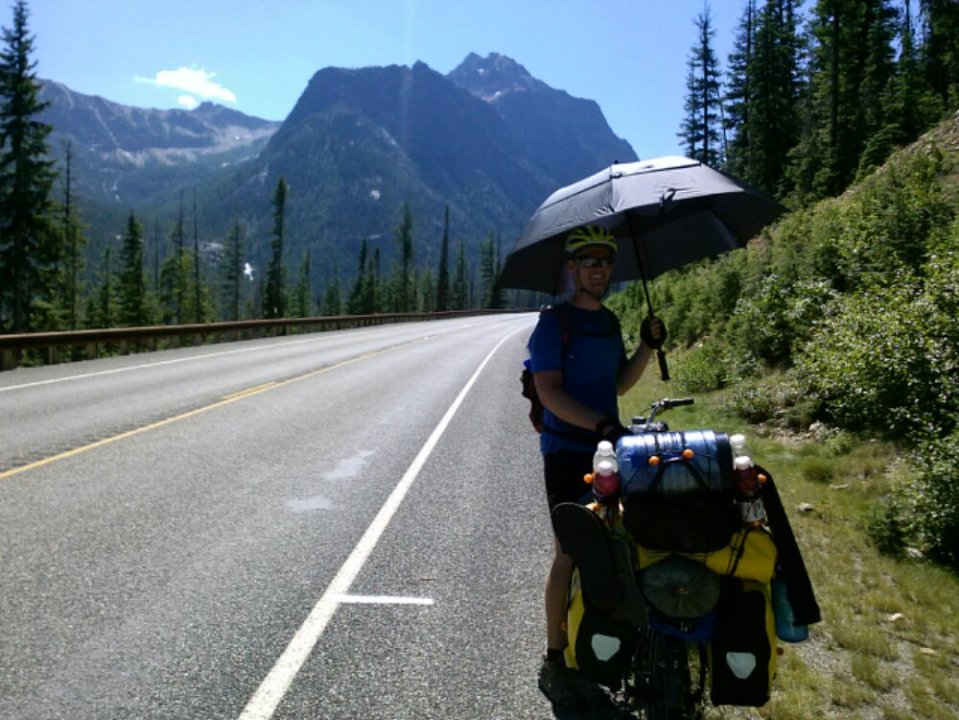 The umbrella has served us well! 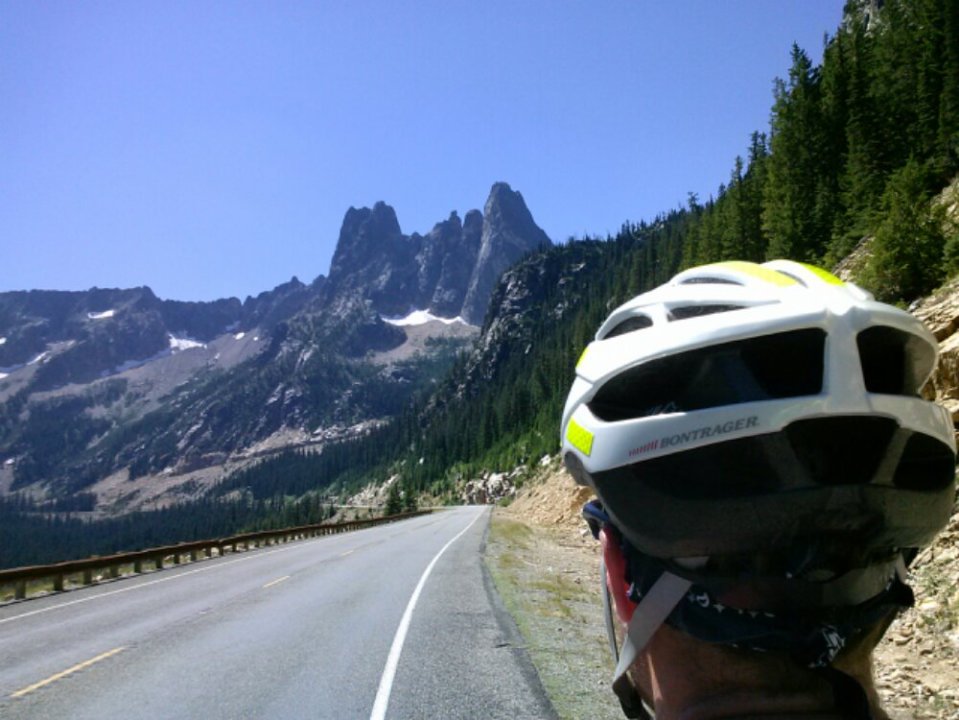 That slanting line of rock is the road...

Who needs guard rails?! On the left down below is the road where the previous picture was taken.

After several grueling hours of climbing, we took a quick break at Washington Pass, then enjoyed a few miles coasting downhill before another shorter climb to Rainy Pass, the second pass today and the final mountain pass of this trip. 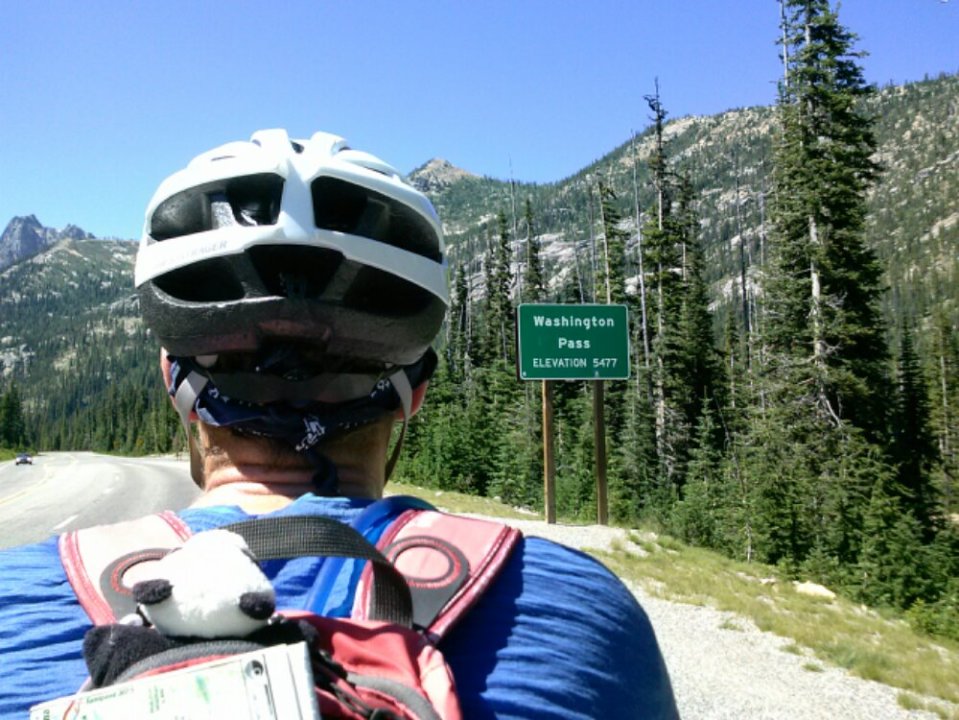 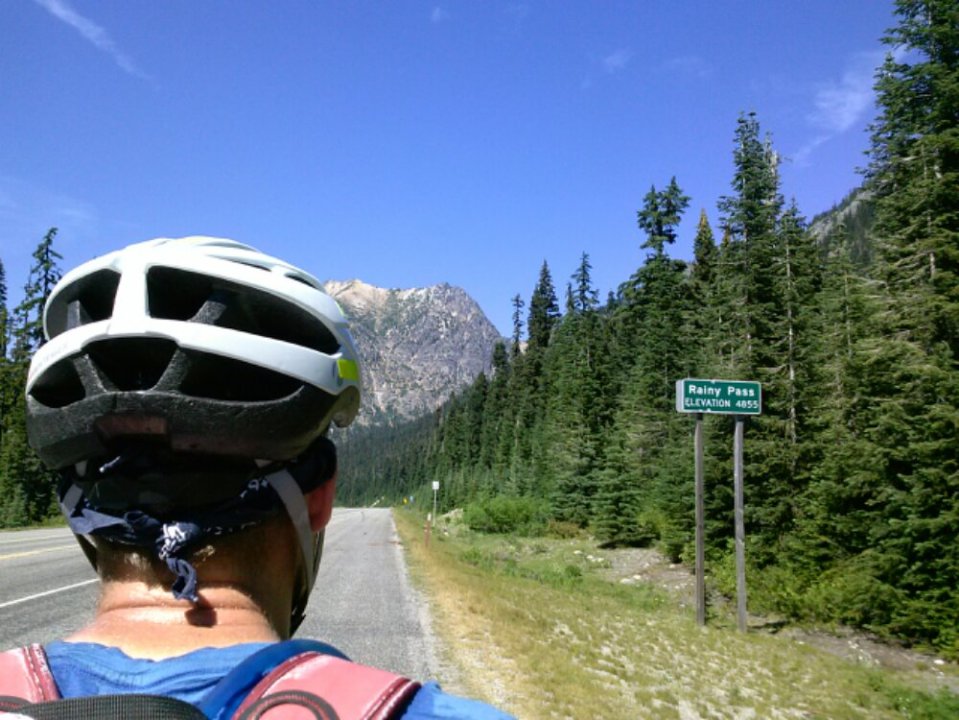 After Rainy Pass we enjoyed the most massive descent of this entire trip. The first portion was suchlike the other descents we’ve had, wide open with sweeping curves, but today’s had grand mountain views (and surprisingly strong cross winds). This was followed by a section of coasting through a canyon and following a river as it wound its way down, cruising along with rock cliffs and the occasional waterfall towering on either side of us.

The river cooled the air quite effectively, leading to a pretty unique and very welcome phenomenon: blasts of colder-than-air-conditioning air every now and then breaking up the 90-plus-degree heat–nice!!
We descended to the shore of Diablo Lake, a beautiful turquoise lake near a series of three dams, and down into forests of moss-covered trees.

Stoped for a quick break in Newhalem and, after studying the elevation map, decided to press on to Marblemount. Arrived at our campground shortly after 7PM, thoroughly exhausted after 87 miles, 4000+ feet of climbing, and over 9 hours in the saddle. A set up camp while J made dinner, had some very welcome showers, and collapsed for the night!

Day 66:
Breakfast at Magoo’s, the most whimsical diner we’ve been in yet: Disney characters painted on   th w walls and memorabilia all around, and a toy train circling the room on a ledge by the ceiling. Left this.behind for rather more depressing surroundings: charred desert landscape, broken here and there by lush green orchards whose elaborate irrigation systems seem to have protected them from the fire that burned everything else. 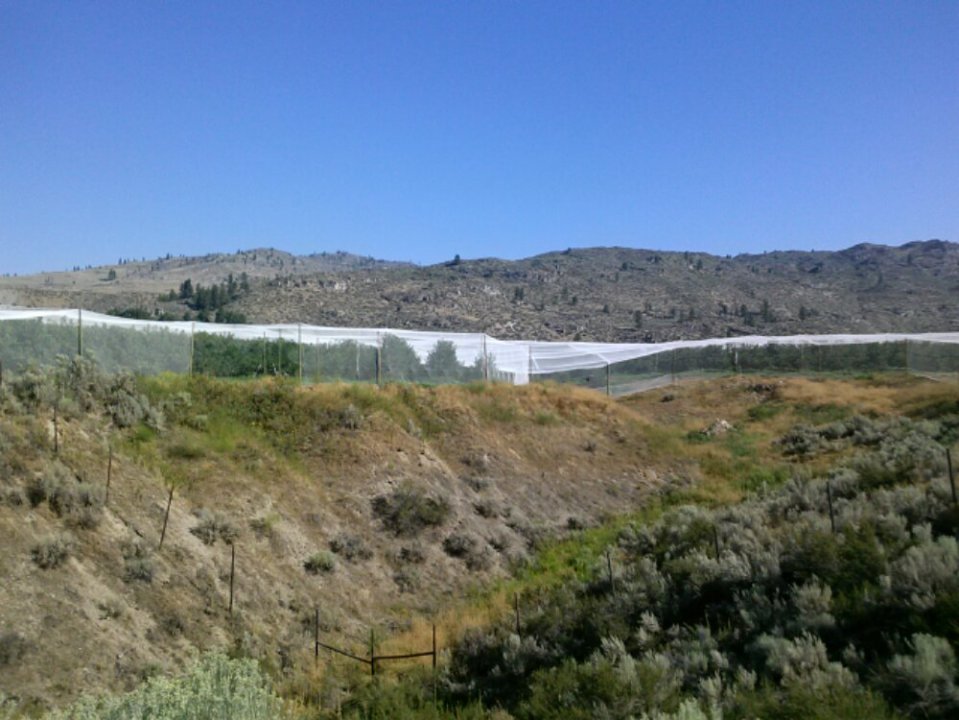 The road to today’s pass, Loup Loup, was the steepest we’ve ridden yet, with crumbling shoulders and heavy traffic.Combined with the intense heat, it made for a pretty exhausting ride. Several hours and many Gatorade breaks later, we finally made it to the top and were rewarded with a pretty nice coast down to Twisp, where we stopped for ice cream before beginning the more gradual climb up to Winthrop. 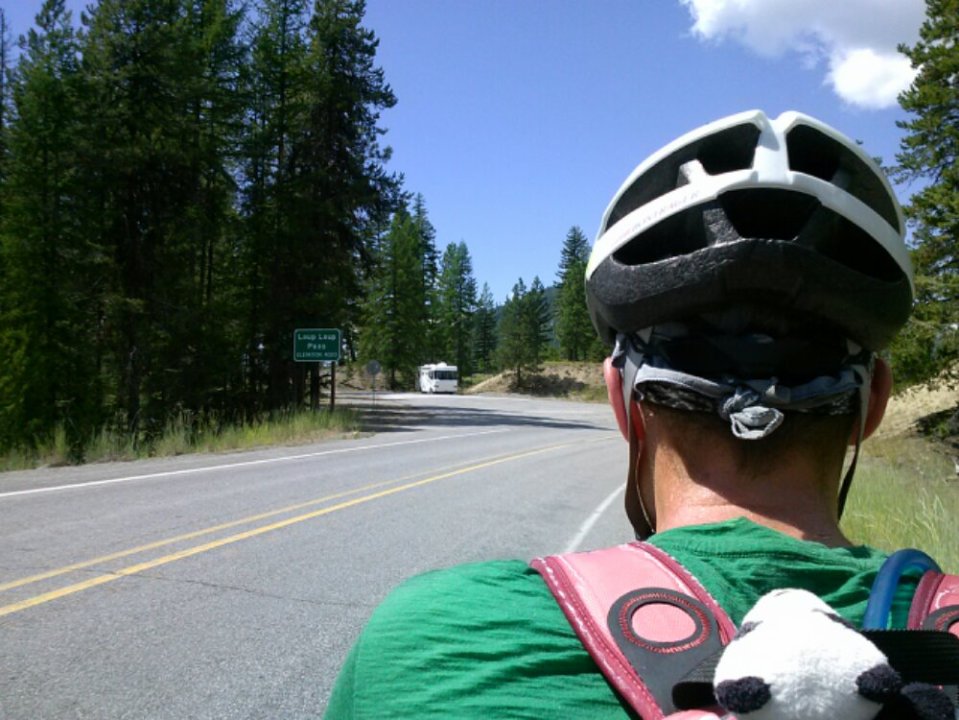 Winthrop is a funny little touristy town with a very western theme, much like Medora. Finished our ride a few miles past town at the home of our Warmshowers host for the evening after a total distance of 56 miles. The family we stayed with was quite an accomplished cycling bunch: 3 years ago they rode the northern tier on two tandems, and last year they rode the Great Divide trail on four mountain bikes. Pretty neat to hear their stories! 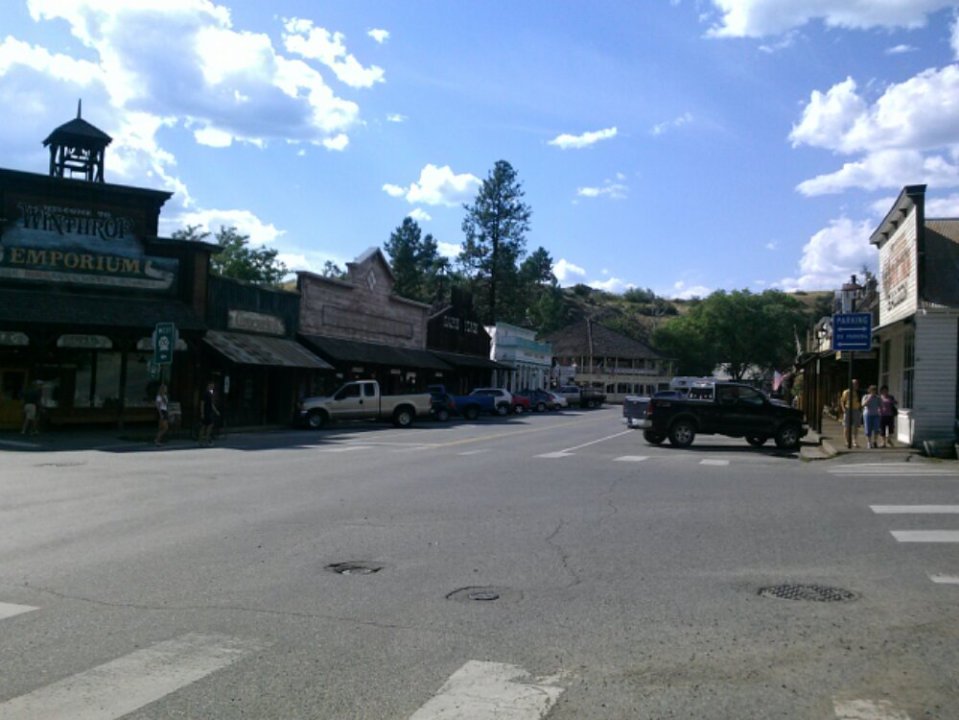 Day 65:
After the requisite pancake breakfast in Republic, we began the climb to Wauconda Pass. Since Republic is in a high valley, we only had about half as much climb as yesterday.

After reaching the top in about two hours, we were rewarded with nice views and a long mostly downhill stretch to Tonasket (although the hot dry weather, wind, and sagebrush were a little too much like Montana for A’s taste).

As we pedaled down to Tonasket we noticed very large stormclouds on the horizon and spent our lunch trying to decide whether to call it a day and take cover or press on. Sat at the visitor center for a few minutes observing the radar online and the lightning strikes to the west. Since the storm seemed to be mostly to the direct west and not moving, we decided to press on and try to get south of it before it moved west. Apparently it’s common here for storms to get “stuck” on the mountains, and we were fortunate that this was the case today. We rode 25 more miles to Omak at top speed, staying right on the edge of the storm the whole way.

Alternated between sun and sprinkles for miles, depending which side of this cloud line we were on!

Beat the storm to the home of our Warmshowers hosts after a total ride of 67 miles. Before having a lovely dinner with our hosts and a fellow cyclist staying here (same one from last night), we went for a walk to see the sight of a rodeo event unique to Omak: the Suicide Hill Race.

20 horses with riders run down this ridiculously steep hill (in the foreground), swim across the river, and then run into the rodeo arena. Crazy!

Day 64:
Cruised out of Colville before 7 and headed to Kettle Falls for some much-needed coffee and breakfast. Rolled downhill to the Columbia River and immediately began our roughly 4000-foot ascent to Sherman Pass. 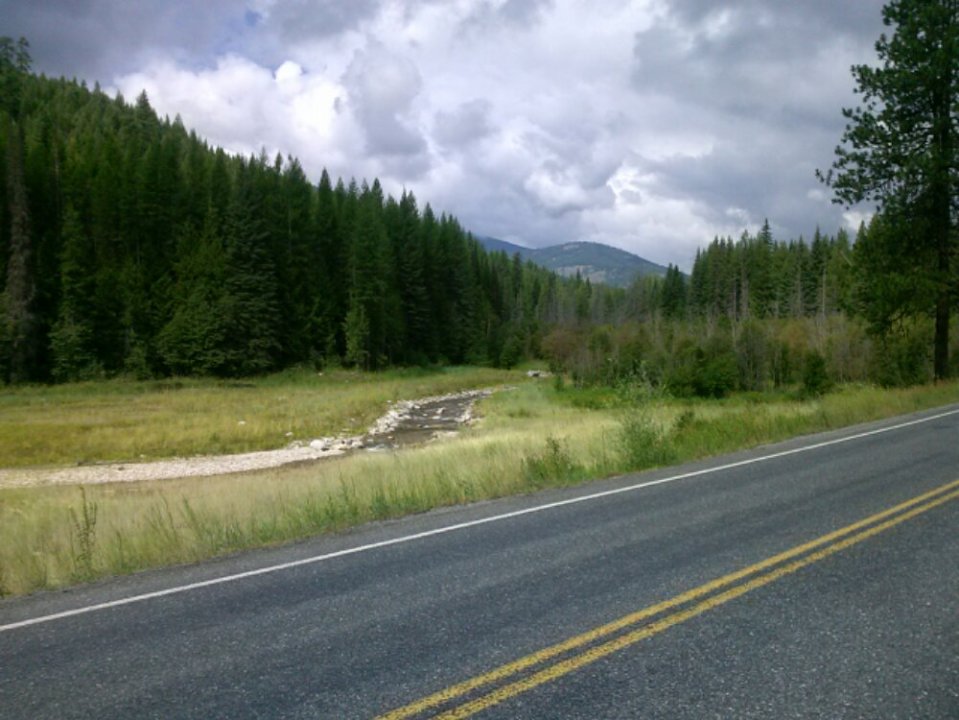 We were in the woods all the way up the pass.

The climb took four hours over about 24 miles, getting progressively steeper near the top. Relatively cool temperatures and intermittent cloud cover made the climb more tolerable, and we enjoyed the company of a babbling roadside stream most of the way up. We were very disciplined on the climb today about taking a brief break every half hour, and it really seemed to keep us feeling better. 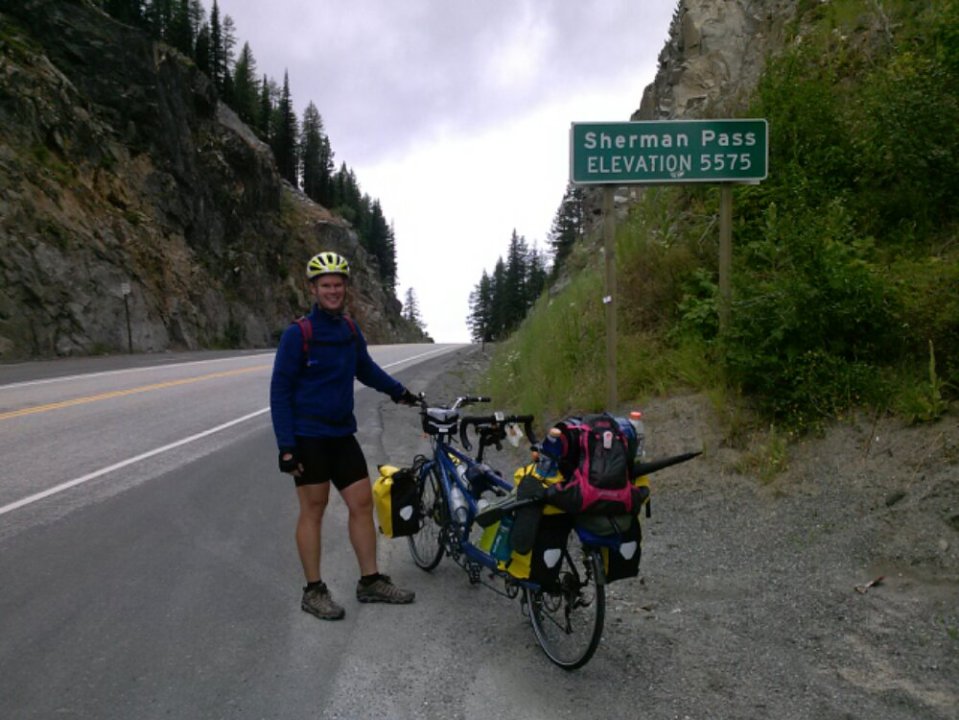 Exhausted but happy to have made it!

About 100 yards past the pass, an unexpected downpour started and soaked us for about the next eight miles, but we didn’t much care, since we were now zipping downhill.

Had to take this one from under the cover of the umbrela--it's more useful than we expected!

The rain let up about halfway down, so we cruised into the valley in sunshine. One more climb brought us into the hills above Republic, where we are staying with Warmshowers hosts (who spoiled us with a delicious dinner) as well as another westbound cyclist.

Day 63:
By the time we left Newport, it was pouring rainrainwith no end in sight. Stopped for a quick breakfast at McDonald’s and got on the road.

Turned onto Flowery Trail Road (off route but 20 miles shorter) for our first pass in the Cascades and started put in some pretty hard climbing.

A very welcome sight--downhill from here!

Rain came and went all day but finally let up for good at the end of our descent in Chewelah. We were ready to call it a day at this point, since we were cold, wet, and exhausted, but no lodging was available, so we pushed on for another 22 miles to Colville and an overpriced but very dry and welcome motel room. After 67 miles of riding and about 2500 feet of climbing, we were famished and tired out but mustered the energy to walk to the laundromat and grocery store.

Day 62:
We were thrilled to get our bike back this morning! The shop opened at ten, and J was ready and waiting. Headed out into cool overcast weather, which was actually welcome since we were getting such a late start.  Rode 37 beautiful miles in the river valley, the only riding we’ll do in Idaho on this trip. From what little we saw of them, the Idaho drivers were extremely considerate–a nice change! Finally entered Washington state three blocks before we got to our motel in Newport, Washington. Thunderstorms predicted for tonight and tomorrow… 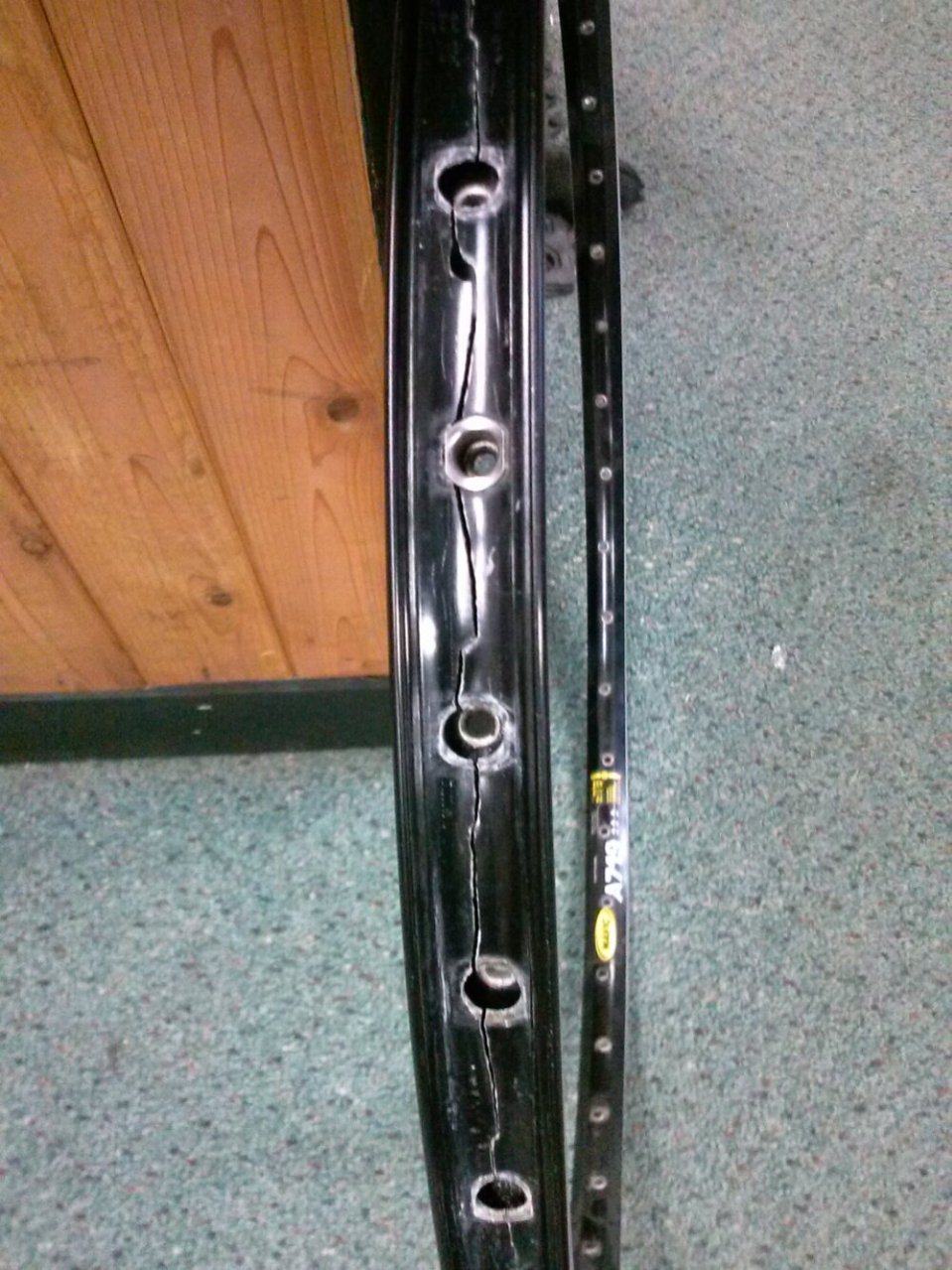 The old rim: that crack extended around all but an inch or two of the rim, and yes, that is a chunk missing. The shop that built our new wheel was the second one to say they'd never seen this before.

Day 61:
Spun our wheels in Sandpoint. Nice town, but we’re eating too much and wishing we were moving. New rim came in; bike shop says it’ll be ready to go tomorrow. We can’t wait.

"Look! A bicycle built for two!"
Blog at WordPress.com.